skip to main | skip to sidebar

Well, it saddens me to see read last week that the infamous Blackstrap Ski Hill -- a giant mound of garbage converted into a ski hill -- is being permanently closed.

(to non-Saskies: no, this is not a joke post. There really is such a thing there.) 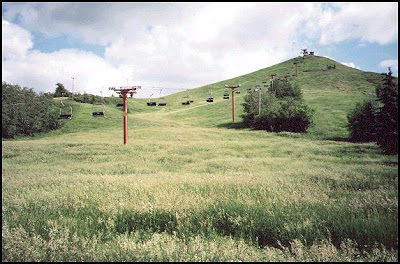 According to the story, the government failed to find a private owner and is thus closing the facility and selling off the assets.

Who knows the real story behind this all, and whether a real attempt was made to keep the "Whistler of the Prairies" afloat. I personally think this ski hill should have been privatized long ago, and if this was not possible to achieve (which I am suspsect was the case as the story suggests) it should have been closed many years earlier.

There is hope though - as long as the city is opposed to the adoption of a recycling program, the garbage dump will continue to grow. Don't think of it as wasteful dumping ina landfill - think of it as a ski hill development opportunity!

Posted by I Hate Saskatchewan at 8:16 AM

Ugh, this province makes no sense. I just moved here from Calgary and I just have a hard time understanding, well, anything here......

I Hate Saskatchewan
I hate Saskatchewan. Sure the people are nice enough but if you think that makes a province great give your head a shake. This blog is dedicated to my RANTS about why this province sucks.